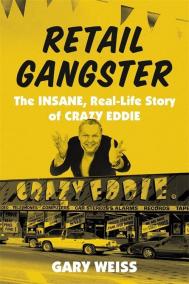 RETAIL GANGSTER by Gary Weiss has received a wealth of critical praise following its publication. Alexandra Jacobs reviewed the book for The New York Times, calling it “a compact and appealing account of Crazy Eddie’s artificially inflated rise and slow-mo collapse” and “a tender requiem for a time, pre-streaming, when people tended to be tuned into the same things,” further praising Weiss’ “sure-footed[ness].” A review from Kirkus praises the way “Weiss paints an intricate portrait of greed, aspiration, and complicated family ties,” adding: “A compellingly readable story about a con artist who ‘epitomized the duality of the American Dream.” Simon Constable wrote a rave review of the book for Forbes, calling it a “must-read” and highlighting the way “Weiss deftly tells the story of three mind-bogglingly complicated things at the same time…without scrambling your brain...This book is worth your time, and Weiss should be saluted for his work.” Lastly, the book was featured on The New York Times’ “11 New Books We Recommend This Week,” as well as the Philadelphia Inquirer’s “The best new books to read in September” lists. Hachette Books published RETAIL GANGSTER on August 23, 2022.