LIFE IS EVERYWHERE by Lucy Ives 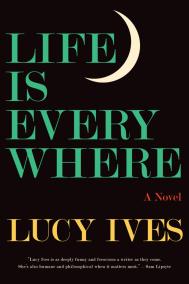 COSMOGONY author Lucy Ives’ forthcoming novel LIFE IS EVERYWHERE is making waves ahead of its fall publication. The book has been featured on most-anticipated lists from Publishers Weekly and The Los Angeles Times, the latter of which praises Ives' "enthralling emotional and psychological acuity, a seemingly bottomless store of knowledge and a thrilling wit." An excerpt of the novel was published on Granta. Ives also wrote a commissioned work of flash fiction entitled "The Sound," which appeared in The Atlantic's first edition of its "Shorter Stories" online series. Graywolf Press will publish the novel on October 4, 2022.