THE NEXT CIVIL WAR by Stephen Marche 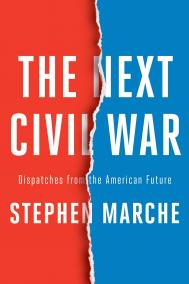 Stephen Marche’s THE NEXT CIVIL WAR published last week to a wave of media attention. The book received praise from CBS: “Relevant and revelatory, THE NEXT CIVIL WAR plainly breaks down the looming threats to America and is a must-read for anyone concerned about the future of its people, its land, and its government.” Marche appeared on MSNBC to discuss the book and America’s current divided political landscape, and also sat down for an interview with Washingtonian for a Q&A about American politics. Simon & Schuster published the book on January 4, 2022.