THE FIFTH ACT by Elliot Ackerman 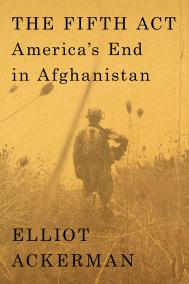 Elliot Ackerman’s THE FIFTH ACT received a wealth of critical acclaim leading up to its publication this week. A glowing review from Booklist reads: “[A] powerful testimony…Ackerman’s tales are compelling and heartfelt; this title will stand the test of time as a warning against further military misadventures.” Ackerman sat down in conversation with Kori Schake of The Washington Post to discuss the book, which Schake describes as a “searing condemnation of both the conduct and abandonment of the war effort.” The Atlantic published an op-ed by Ackerman titled “The Rivalry That Defines America: How the U.S. dealt with Russia in Afghanistan is informing how Russia is dealing with the U.S. in Ukraine.” Lastly, Amazon Books selected THE FIFTH ACT as one of its Editors' Picks in the Best History category. Penguin Press published the book on August 9, 2022.