THIS WEIGHTLESS WORLD by Adam Soto 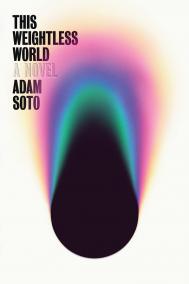 Adam Soto’s debut novel THIS WEIGHTLESS WORLD published this week to positive acclaim. Kirkus praises Soto’s “finely drawn” characters and “philosophically thorny conflicts,” adding: “Amid the discovery of alien life, [THIS WEIGHTLESS WORLD is] a touching meditation on humanity.” The book also received a glowing blurb from Locus’ Ian Monde: "Soto brilliantly inverts the inherently outward aspect of the first-contact trope—the idea of seeking salvation in the stars—by forcing his characters to look inward, to question their acquiescence on issues like climate change, police brutality, and the smothering influence of Big-Tech...It's precisely Soto's refusal to be 'weighted' down by decades of genre tradition, to instead turn the trope on its head and in doing so remind us that no-one but ourselves is coming to save us, that makes THIS WEIGHTLESS WORLD such an exciting and radical novel." Astra House published the book on November 9, 2021.