THE POWER BROKER by Robert Caro 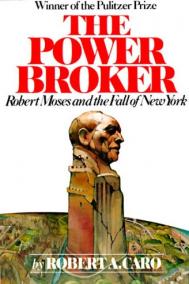 In honor of the 40th anniversary of Robert Caro’s biography of Robert Moses, THE POWER BROKER, the Daily Beast published an article “The Power Broker turns 40: How Robert Caro Wrote a Masterpiece” detailing the history of the book and discussing the ways in which it “rewrote the rules of biography.” Knopf originally published the book in 1974 and it won the Pulitzer Prize in 1975.