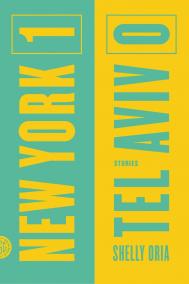 Shelly Oria’s NEW YORK 1, TEL AVIV 0 was given a starred review in Kirkus, which said, “These are crisply told, biting tales about characters split in two because of country or love… Oria's fiction is tense and gripping; it's like the surprising and disconcerting sound that emerges from an instrument played by a traditionally trained musician who's chosen to explore new territory.” Farrar, Straus and Giroux will publish the book on November 4.