THE KEPT by James Scott 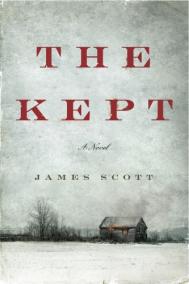 James Scott’s THE KEPT was reviewed in the New York Times Book Review and was given three stars by USA Today, which called it an “unsettling but gracefully written debut novel” and the dialogue “simple, direct and haunting.” The New York Times Book Review said, “Scott is a master of mood… This landscape is more mythic than historic, and Scott’s characters are dark brush strokes of appetite and deceit.” Harper published the book on January 7, 2013.