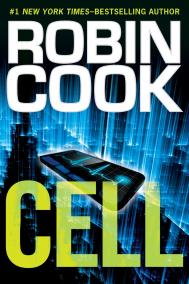 CELL deputed at number 11 on the New York Times Hardcover Bestseller list for the week of February 23, 2014 and the book was featured in the “Inside the List” column. Robin Cook also published (with Eric Topol) an Op-Ed called “How Digital Medicine Will Soon Save Your Life” in the February 22-23 Wall Street Journal. The book was featured in the PW Bestsellers column for the week February 3-February 9, 2014. Putnam published the book February 13, 2014.