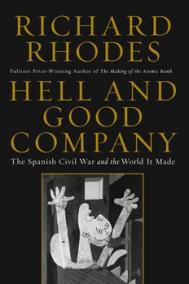 Richard Rhodes’ HELL AND GOOD COMPANY: THE SPANISH CIVIL WAR AND THE WORLD IT MADE received a starred review in Booklist, which praised the book for “so graphically allowing contemporary readers to appreciate all the nuances of what transpired in Spain in those dark years” through the eyes of reporters, writers, artists, doctors, and nurses who witnessed it. Simon & Schuster will publish the book on February 3, 2015.