THE LAND OF STEADY HABITS by Ted Thompson 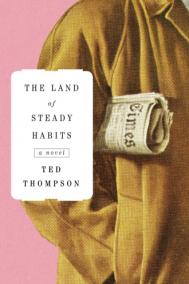 The adaptation of Ted Thompson’s debut novel, THE LAND OF STEADY HABITS, will be written and directed by Nicole Holofcener and produced by Anthony Bregman for Fox Searchlight. Holofcener recently won an Independent Spirit Award for her movie “Enough Said,” and is also known for such acclaimed films as “Lovely & Amazing,” “Friends with Money,” and “Please Give.”

The author commented on his blog, “I should probably say I'm kind of in awe of the fact that a director I've long admired wants to make it.” Little, Brown published THE LAND OF STEADY HABITS on March 5, 2014.
Follow the links to read more: http://www.thewrap.com/nicole-holofcener-to-write-direct-land-of-steady…
http://www.tedthompson.net/post/95189996723/all-the-happy-news