THE PASSAGE OF POWER by Robert Caro 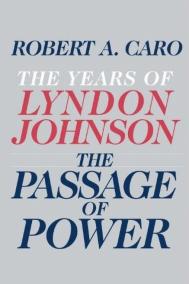 Robert Caro is interviewed on his multi-volume biography of Lyndon B. Johnson in The Christian Science Monitor’s “Chapter & Verse” blog: “Robert Caro likes to say that he isn’t writing about Lyndon Johnson’s life. Instead, the 36th president’s tireless biographer says, he uses LBJ as a focal point to explore the use of power in the American political system.” Knopf published the fourth volume of the series, THE PASSAGE OF POWER May 1, 2012.